Graduation Speech at U of Pennsylvania May 15, 2016

Thank you Dean Fluharty, and thank all of you for this opportunity to return to the place that for me was not only formative but fun. Most important of all, congratulations to each and every one of you.
I will keep these remarks concise, for many reasons not least of which is a conversation I had with my ten year old son Nate who reminded me in no uncertain terms that it is your accomplishments being celebrated here today, not mine. 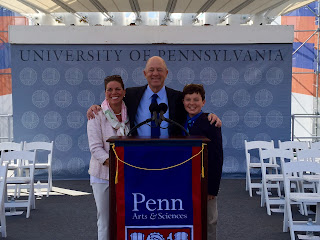 Nate had noticed, on a shelf in my closet, an honorary degree from another University whose commencement speech I delivered a few years ago. He asked “dad, did you go there.” I said “no,”. He said “but they gave you a diploma.” I said “no, it’s not a diploma, that’s an honorary degree”. He said, “but you didn’t go there?”  “No” I replied. “So you got it for doing absolutely nothing.”
“Well not quite nothing” I offered sheepishly. “I think they hoped my work and words might inspire the graduates.”
“Dad, do you seriously think it is inspiring to go to college every day for four years and see the first degree go to someone who’s never been there a day in his life?”  A ten year old’s logic is always hard to contest. “It’s just honorary”  I said in retreat.   He shook his head and walked out of the room uttering the worn word he uses for all adult pretension: “Sad.”

So, appropriately chastized, I will briefly share only three things and then sit down. 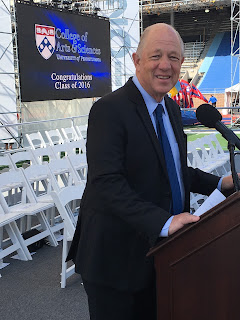