José Andrés and the #1 Killer of Women and Children

Can a simple cookstove end world hunger and poverty? Celebrity chef José Andrés was named one of the Time 100 Most Influential People of 2018 for his dedication to humanitarian causes and recently delivered more than 3 million meals in Puerto Rico in the wake of the devastating 2017 hurricanes, but he has been helping people around the world for many years. He joins host Billy Shore and United Nations Foundation President and CEO Kathy Calvin to discuss why a simple clean cookstove drives cultural, environmental and economic change in the developing world. “If we want to end poverty in this century, I believe clean cookstoves is the one single issue [where] everything meets,” says Andrés. “It’s one of the number one killers of women and children in the world,” agrees Calvin, explaining the UN Foundation’s Global Alliance for Clean Cookstoves initiative. The statistics are jarring: Four million women and children around the world die every year as a result of inhaling the smoke and soot from wood, coal and kerosene cookstoves.

These two changemakers believe Americans should care more about global poverty issues. Andrés, who poured his heart and soul into helping the people of Haiti and Puerto Rico, references the current national conversation about building walls to keep people out. “The only wall conversation we should be having is walls that we’re going to build to create community kitchens and schools,” he explains. “If we don’t pay attention to what’s happening around the world, we will find it hitting us and in ways we don’t like,” notes Calvin.

Listen in as these two passionate anti-hunger and poverty crusaders explain a simple solution to one of the most intractable problems in the world. 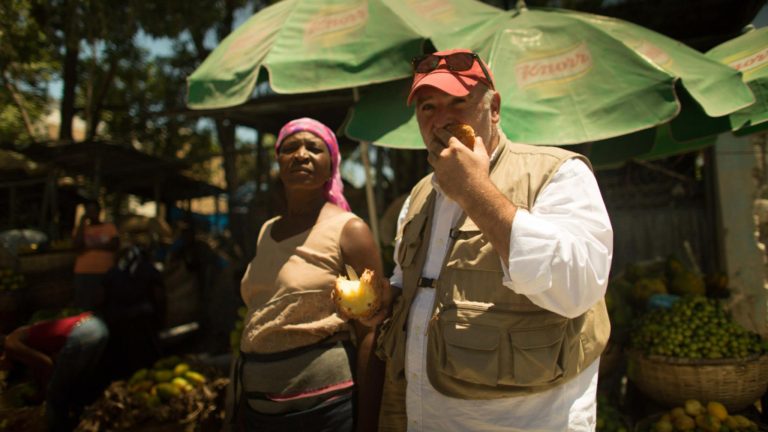 Named one of Time’s “100 Most Influential People” in both 2012 and 2018 and awarded “Outstanding Chef” and “Humanitarian of the Year” by the James Beard Foundation. He is an internationally-recognized culinary innovator, author, educator, television personality, humanitarian, and chef/owner of ThinkFoodGroup. A pioneer of Spanish tapas in the United States, he is also known for his groundbreaking avant-garde cuisine and his award-winning group of 29 restaurants plus a food truck located throughout the country, as well as in Mexico City and the Bahamas. José is the only chef globally that has both a two-star Michelin restaurant and four Bib Gourmands. His award-winning restaurants include two Michelin-starred minibar by José Andrés, Jaleo, Zaytinya, J by José Andrés at W Mexico City, Bazaar Meat at SLS Las Vegas, the Bazaar by José Andrés at the SLS Hotel in Beverly Hills and South Beach, and Beefsteak, his vegetable-driven fast casual concept. Andrés is a committed advocate of food and hunger issues and is known for championing the role of chefs in the national debate on food policy. In 2012, Andrés formed World Central Kitchen, a non-profit that provides smart solutions to hunger and poverty by using the power of food to empower communities and strengthen economies. Most notably, World Central Kitchen, along with #ChefsForPuertoRico, served over 3.5 million meals to the people of Puerto Rico following Hurricane Maria. Andrés’ work has earned awards and distinctions including the 2017 Lifetime Achievement Award from International Association of Culinary Professionals and the 2015 National Humanities Medal, one of twelve distinguished recipients of the award from the National Endowment for the Humanities. Andrés was also named EY Master Entrepreneur of the Year in Greater Washington for his leadership and impact on the global business community and was also awarded the Congressional Hispanic Caucus Institute’s Chair’s Medallion Award. 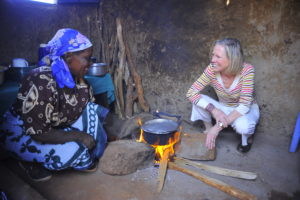 President and Chief Executive Officer of the United Nations Foundation. Her career has spanned work in the public, private and nonprofit sectors. She is a passionate advocate for multi-sector problem-solving, U.S. leadership on global issues, and the inclusion of women at all levels and in all sectors. She was named CEO by the UN Foundation Board in 2009 and President in 2013. In those roles, she leads one of the most innovative organizations advocating for the UN and the creation of public-private partnerships. Her leadership brings together the largest network of supporters of UN issues in the United States and a global network of corporate, civil society and media partners. In 2011, Calvin was named one of Newsweek’s “150 Women Who Rock the World,” and in 2012, she was listed in Fast Company’s “League of Extraordinary Women.” Her innovative work in the philanthropy and international NGO sector was featured by the New York Times in 2011. She has received numerous other awards for philanthropy and leadership. Prior to joining the UN Foundation as Chief Operating Officer in 2003, Calvin served as President of the AOL Time Warner Foundation, where she guided AOL Time Warner’s philanthropic activities and was the chief architect of the company’s corporate responsibility initiatives. She joined America Online in 1997 as Senior Vice President and Chief Communications Officer and was responsible for the company’s brand, social responsibility, and external relations. Throughout her career, Calvin has taken an active role in a range of philanthropic activities, including the boards of the International Women’s Media Foundation, City Year, Internews, the Newseum, Share Our Strength, the United Nations Association of the United States of America, and the East-West Center. She is a frequent public speaker and commenter.

Links the UN’s work with others around the world, mobilizing the energy and expertise of business and non-governmental organizations to help the UN tackle issues including climate change, global health, peace and security, women’s empowerment, poverty eradication, energy access, and U.S.-UN relations. he United Nations was established to foster global peace, prosperity and justice. It has succeeded in its fundamental mission of preventing a third world war and improving global quality of life. But over the last 60 years, the UN’s mission and membership have been broadened dramatically. The UN is now asked to tackle the world’s most intractable problems—global scale challenges that transcend borders but directly or indirectly affect us all: health, the environment, human rights and justice, peace and security, population, hunger and peacekeeping. The UN Foundation works with UN to connect people, ideas and resources with the UN to solve the great global challenges of the 21st century.

Innovative company behind José Andrés restaurants, hotels, food products, media, educational initiatives and philanthropy. They pursue the mission of changing the world through the power of food. Since 1993, TFG restaurants reflect the authentic roots of each concept, and showcase Andrés’s passion for telling the stories of a culture through food.

World Central Kitchen provides smart solutions to hunger and poverty. José Andrés founded World Central Kitchen after the devastating 2010 earthquake in Haiti with the belief that food can be an agent of change. They have expanded globally and have helped affected communities in Brazil, Cambodia, Cuba, Dominican Republic, Haiti, Nicaragua, Zambia, and the United States. Today, World Central Kitchen uses the expertise of its Chef Network to empower people to be part of the solution, with a focus on health, education, jobs, and social enterprise.