Leading a City Back from Despair: The Community Leaders Who Rebuilt Boston

How do we rebuild trust in our institutions and leaders? Executive Vice President, Communications and External Relations at Brandeis University Ira Jackson and Boston chef and restaurateur Chris Coombs (dbar, Boston Chops and Deuxave) weave a powerful narrative about social responsibility, entrepreneurship and urban renewal with host Billy Shore. Jackson, who was Chief of Staff to Mayor Kevin White in 1970’s Boston, vividly describes the urban decay that defined the city at the time and the racism and violence that erupted over the school bussing program. “A whole generation of students was lost. The notion that 44 years later, today Boston would be the kind of tolerant, inclusive, hip, young city that it is, is a story of redemption,” he says. Coombs relates his own experience of becoming chef and partner of dbar, a restaurant that was built on a commitment to diversity and inclusion. “When you talk about stories in the mid 70’s, the amount of progress we’ve been able to make as a city and a country in very short amount of time is incredible. But progress only happens if you’re committed to making it.

Coombs, who owns four restaurants and employs hundreds, has intentionally built social responsibility into his organization, focusing on family homelessness and hunger. “As we grow, it makes me realize how much it’s about imparting culture and vision and letting your team share that with others,” he says. Billy Shore asks Jackson what he has learned from a career that has spanned the public, private, non-profit, and academic sectors. “Part of the moral of the story is we can’t do this on our own and government shouldn’t do it for us, so we need public/private partnerships and collaboration,” he believes. However, he is concerned that trust in our leaders and institutions has almost completely eroded. “I think you have to rebuild it locally – people have to see and touch and feel the impact they’re having because they don’t trust somebody far away,” concludes Shore.

Listen to this conversation between two dynamic storytellers as they discuss urban renewal and revitalization through the lens of their personal experiences in the city of Boston. 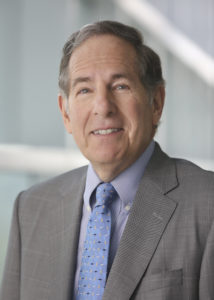 Executive vice president, communications and external relations at Brandeis University. He provides leadership for Brandeis’ relations with the community, government, businesses and other institutions locally, nationally and globally and assists the president and others in advancing and communicating Brandeis’ intellectual and institutional contributions. Jackson has held senior positions in government, business and academia. In government, he served as chief of staff to former Boston Mayor Kevin White and later as Massachusetts Commissioner of Revenue under Gov. Michael Dukakis. In academia, he served as senior associate dean of Harvard’s Kennedy School and director of its Center for Business and Government. He also served as president of the Arizona State University Foundation, dean of the Peter Drucker School of Management at the Claremont Colleges, and dean of the John W. McCormack School of Policy and Global Studies and vice provost of the University of Massachusetts Boston. In business, for a dozen years Jackson was executive vice president of BankBoston. He has also played leadership roles in a number of civic initiatives, including CityYear, the Boston Foundation, the New England Holocaust Memorial and Facing History and Ourselves. A graduate of Harvard College, he received his MPA from Harvard’s Kennedy School and graduated from the Advanced Management Program at the Harvard Business School.

Chef and co-owner of Boston Urban Hospitality which owns dbar, Deuxave, and Boston Chops. Coombs graduated from the Culinary Institute of America in New York and worked under award-winning chefs in Massachusetts and then Virginia. He returned to Boston and in 2006 and created Boston Urban Hospitality with business partner Brian Piccini. In 2010, Coombs opened his first restaurant, Deuxave, in Boston. Coombs’ cuisine at Deuxave is strongly rooted in the nouvelle techniques of contemporary French cuisine, married with the splendor of American ingredients in a refined setting. Since then, Coombs’ success has grabbed the attention of both local and national media, including an appearance on Food Network’s “Chopped” and recognition by Food & Wine magazine as a candidate for “The People’s Best New Chef in New England.” In early 2013, Coombs and Piccini debuted his third concept, Boston Chops. The urban steak bistro has been named one of Food & Wine magazine’s “Best New Steakhouses” and won Best Steakhouse 2015 from Boston magazine’s coveted Best of Boston awards. In 2013, Coombs was named “30 Under 30” for chefs by Forbes Magazine’s and Zagat. He was also named the Massachusetts Restaurant Association’s “Restaurateur of the Year” for 2015.

A medium-sized private research university with global reach dedicated to first-rate undergraduate education while making groundbreaking discoveries. Its 235-acre campus is located in the suburbs of Boston, a global hub for higher education and innovation. Its faculty are leaders in their fields, as passionate about teaching and mentorship as they are about pushing the boundaries of knowledge. Brandeis students are motivated, compassionate, curious and open to exploring new and challenging experiences. It is a community rooted in purpose, guided by its founding values, poised to lead in education and research in the 21st century.

Currently owns and operates four restaurants in Boston–Deuxave, Boston Chops (South End and Downtown) and dbar. It is made up of a team of passionate hospitality professionals who believe in seasonal, sustainable, and local food and value a work environment where passion produces excellence. From focusing on exceptional service to cooking heartfelt and exciting meals to remember, Boston Urban Hospitality scrutinizes every detail that goes into orchestrating unforgettable culinary experiences.