The Next Generation: Changing Culture and Changing the World

How can the next generation change our culture to solve social problems? In this special episode of Add Passion and Stir made possible by generous support from the Sodexo Stop Hunger Foundation, Gerri Mason Hall, Senior Vice President of Human Resources for Sodexo and Chair of the Sodexo Stop Hunger Foundation, and Derek Brown, owner of Columbia Room in Washington DC, have a lively discussion about diversity and inclusion, young leaders, culture change, and classic cocktails. Mason Hall, Brown and hosts Share Our Strength co-founders Debbie and Billy Shore believe that the fresh, uncynical passion of our youth can solve major social problems. The recent activity around gun control is a prime example. “One of the most exciting things is the fresh eyes to an approach at problem solving,” says Mason Hall, who focuses on enabling young people through Sodexo’s work and the No Kid Hungry Youth Ambassador Program. Brown is proud that he empowers his employees to protect others, working closely with Collective Action for Safe Spaces to train employees about recognizing and intervening when they see sexual harassment or violence. Billy Shore shares their hopefulness about youth changing the future. “Sometimes there’s an advantage to ‘you don’t know what you don’t know’…you don’t get discouraged, you don’t get disappointed, you think everything can change,” he says.

Both guests also value culture change. Mason Hall has spent decades building a culture of diversity and inclusion at Sodexo. “In the early 2000s, the emphasis was on representation – especially women and minorities – in the workplace… Now we’re not just focused on numbers coming in, but how inclusive is the culture,” she explains. She relishes playing the role of mentor for a younger generation and helping them turn their vision into change. “It is this diversity of thought that together will help us innovate and solve these problems,” she says. Brown is noted for creating change in how the next DC generation feels about alcohol through his emphasis on well-made culinary cocktails. “We’re really turning drinking more into a ritual…you’re not focusing on quantity, you’re focusing on quality,” he says. A historian of alcohol, he describes its place in American culture. “Our culture has a particular relationship with alcohol… and we have changed it through creating these cocktail bars that are a little different,” he believes.

Share in this informative and fun conversation between two leaders mentoring the next generation in their respective fields. 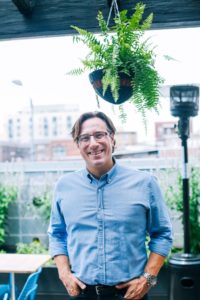 A leading spirits and cocktail expert and president of Drink Company, which owns and operates 2017 Spirited Award winning “Best American Cocktail Bar” Columbia Room as well as PUB, a rotating pop-up bar that’s housed the wildly-popular Miracle on 7th Street, Cherry Blossom PUB and Game of Thrones PUB. A native Washingtonian with deep ties to the city — his great-grandfather was once D.C.’s police chief — Derek thinks that Washington provides a unique vantage point as the capital city, having mixed drinks for everyone from royalty, ambassadors and senators to fellow Washingtonians, interns and students. He’s concocted cocktails at the White House and was appointed Chief Spirits Advisor at the National Archives. Derek’s passion for spirits has taken him across the globe, where he’s learned about the integral role food and drink play in the culture, customs and values of communities worldwide. He’s also written about drinks and drinking for The Atlantic, The Washington Post and Bon Appetit magazine. He is also a spirits judge at the prestigious San Francisco World’s Spirit Competition. 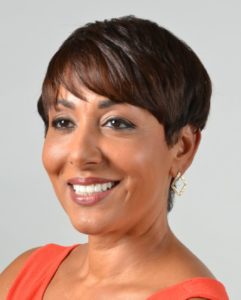 Senior Vice President of Human Resources for Sodexo and Chair of the Sodexo Stop Hunger Foundation. In her previous role of Corporate Vice President for Learning and Performance, she led the transformation of Sodexo’s Learning & Performance Office, ensuring the alignment of Sodexo’s learning strategy and resources with the company’s strategic business plans. Prior to this, Ms. Mason Hall served as VP of Human Resources for the Corporate Services and Government Services businesses, providing Human Resources leadership and support for a workforce of over 15,000. Ms. Mason Hall joined Sodexo to lead Diversity & Inclusion in the Corporate and Government Services business segments. Prior to Sodexo, Ms. Mason Hall designed and implemented Amtrak’s diversity and inclusion programs as its Vice President of Business Diversity and Strategic Initiatives. Ms. Mason Hall has held a number of appointments in both the federal and District of Columbia governments, including the U.S. Commission on Civil Rights, where she honed her interest in Inclusion. Ms. Mason Hall is a member of Sodexo Women’s International Forum for Talent (SWIfT), the Executive Leadership Council, and the Board of Directors for Sodexo Foundation. Sodexo Foundation is an independent charitable organization founded in 1999 to ensure that every child in the United States grows up with dependable access to enough nutritious food to enable them to lead a healthy, productive life. To date, the Sodexo Foundation has contributed more than $25 million in grants to end childhood hunger.

A bar created by Derek Brown where cocktails and cuisine merge together to create a memorable experience. They have three distinct spaces—Tasting Room, Spirits Library and Punch Garden. The Tasting Roomexperience is ticketed and consists of a four-course thematic menu of inventive cocktails paired with small bites. The Spirits Library and Punch Garden are open seating at tables and include a la carte drinks and dishes. The establishment is noted for its exceptional service, meticulously crafted drinks and exquisitely made dishes. It has won numerous accolades, but their goal is to wow and amaze the guests they serve.

http://us.stop-hunger.org/home.html
Created in 1999 with the mission to ensure that every child in the United States grows up with dependable access to enough nutritious food to enable them to lead a healthy, productive life. Sodexo, Inc. funds all administrative costs for Sodexo Stop Hunger Foundation to ensure that all money raised helps those in need. Since its inception, the Foundation has granted more than $29 million to alleviate child hunger. Stop Hunger mobilizes volunteers, including Sodexo employees, clients, customers and youth to contribute to hunger-free communities around the world. Sodexo employees support Stop Hunger year-round by donating their time, resources and expertise, holding fundraisers and encouraging others to get involved. Globally, Stop Hunger is a leading force in the fight against hunger that is present in 44 countries with the goal of being in all 80 countries where Sodexo does business.