The Whole World is Watching: New Ideas in the Fight Against Hunger

Can the U.S. farm-to-table movement inform anti-hunger programs in developing countries? This episode takes an international turn with renowned chef and restaurateur Floyd Cardoz (Bombay Bread Bar, Bombay Canteen, O Pedro) and World Food Programme (WFP) School Feeding Division Director Carmen Burbano for part one of a two-part conversation with host Billy Shore. Indian-born Cardoz says that while the focus on using local ingredients in the U.S. has created economic opportunities for small farmers and suppliers here, people in India still prefer imported food. His restaurants in India are teaching people that traditional, local ingredients can be cool. “If we sustain the community, we sustain the food source, food gets cheaper, more people eat,” he explains. Burbano discusses how WFP connects the demand created by its school feeding programs to smallholder farmer markets in many countries. “This has generated income and livelihood opportunities for millions of farmers, many of them women… and kids are automatically getting more nutritious food,” she notes.

In addition to farmers, Burbano discusses developing networks to disseminate nutrition information to pregnant women and young mothers. In Peru, which was battling a childhood anemia epidemic, WFP teamed up with the country’s chef community to create a cooking show (Cocinar con Causa) around better eating and cooking habits to fight anemia. “Chefs have a very important influence on how people choose to eat what they eat,” she says. In India, Cardoz is trying to overcome cultural barriers to teach his community to give back. “Indians believe in giving to the gods, but not so much giving to the community,” he says. He founded a culinary event that brings the community together to raise money for designated causes. “People do want to give, but they don’t know how,” he explains.

Join us for this important conversation about innovative solutions to international hunger issues. 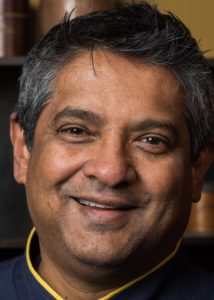 Chef Floyd Cardoz
an Indian-American chef, cookbook writer and restaurant owner, who runs restaurants both in India and United States. Cardoz opened Paowalla in New York’s Soho neighborhood, focusing on small plates to redefine approachable Indian cuisine. In 2018, he closed Paowalla, redesigned it with a more casual, festive atmosphere, and reopened it as Bombay Bread Bar. He also owns two restaurants in Mumbai, India, The Bombay Canteen, which rose to local and international acclaim and O Pedro. Cardoz attended culinary school in Mumbai and then The Global Hospitality Management School at Les Roches in Switzerland to broaden his knowledge of international cuisines. He moved to New York City in 1988 and started working under Chef Gray Kunz at Lespinasse. In 1997, he left to work with Union Square Hospitality Group, for which he opened groundbreaking, fine-dining Indian restaurant Tabla, and later El Verano Taquería and North End Grill. In 2012, Cardoz won season 3 of Bravo’s “Top Chef Masters.” He donated his winnings to the Young Scientist Cancer Research Fund at The Icahn School of Medicine at Mount Sinai. He has received the James Beard Award for “Humanitarian of the Year” in honor of his continued commitment to community engagement. 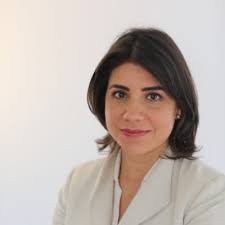 The Director of the United Nations World Food Programme’s (WFP) School Feeding Division and lead author of the WFP publication, State of School Feeding Worldwide (2013). Prior to that she was a country director for the WFP for 14 years, stationed in Peru. In 2010, she earned a Master of Public Administration from Harvard Kennedy School.

A café and bar that is Indian at heart. Housed within the bustling metropolis of Mumbai, it prides itself on recreating local dishes and reinterpreting age-old Indian traditions, to create an experience that toasts the old times and celebrates the new. The kitchen presents the classic yet unexplored charm of India’s diverse regions, marrying them expertly with familiar flavors. And the bar, a great place to hang out at The Bombay Canteen, has a unique selection of reimagined classic cocktails with firm Indian roots.

A Goan Bar and restaurant in Mumbai, India. Focusing on the culture of the Goa region of India with drinks that bring back the fun of tropical living and simple yet sophisticated food that reflects the regions culinary diversity.

(WFP) assists 91.4 million people in around 83 countries each year. The WFP is the leading humanitarian organization saving lives and changing lives, delivering food assistance in emergencies and working with communities to improve nutrition and build resilience. As the international community has committed to end hunger, achieve food security and improved nutrition by 2030, one in nine people worldwide still do not have enough to eat. Food and food-related assistance lie at the heart of the struggle to break the cycle of hunger and poverty. On any given day, WFP has 5,000 trucks, 20 ships and 92 planes on the move, delivering food and other assistance to those in most need. Every year, we distribute more than 15 billion rations at an estimated average cost per ration of US$ 0.31.