The World Is Not What You Think: Milk Street’s Chris Kimball and WGBH’s Jon Abbott

What is the media’s responsibility to keep us informed? WGBH president and CEO Jon Abbott and culinary personality and Milk Street founder Christopher Kimball join host Billy Shore in Boston to discuss the intersection of education, media and culture. “This is not about a sound bite, this about having a conversation with people,” explains Abbott about the role of WGBH, a Boston public radio station and member station of National Public Radio and Public Radio International. Kimball agrees with the importance of the media message. “If you manage your media business strictly to make a profit, Julia Child and Mr. Rogers are not going to be on television,” he says.

Kimball, the creator of popular PBS programs America’s Test Kitchen and Milk Street Television, talks about exploring international food culture. “It’s always changing, that’s what’s exciting; the world isn’t what you thought,” he notes. “That’s what public media is really all about, revealing and exploring and giving people a sense that there’s always something to learn,” concludes Abbott.

Listen to this engaging conversation as three thought leaders discuss the pitfalls and possibilities of the information age. 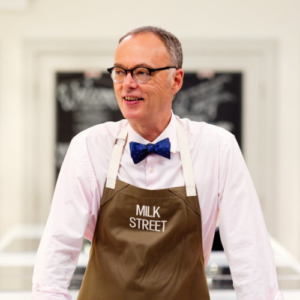 An American chef, editor, publisher, and radio/TV personality. Kimball was a co-founder and has been editor and publisher of America’s Test Kitchen, which produces television and radio shows, and publishes magazines, including Cook’s Illustrated,[6] which Kimball launched in 1993. In 2016, he created Christopher Kimball’s Milk Street, a multimedia, instructional food preparation organization located on Milk Street in Boston, Massachusetts. He is the author of The Cook’s Bible, The Yellow Farmhouse Cookbook, Dear Charlie, The Dessert Bible and Fannie’s Last Supper, and is a columnist for the New York Daily News and the Boston-based Tab Communications. 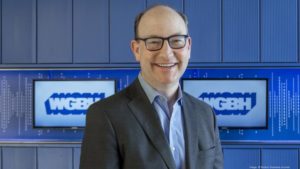 The president and CEO of WGBH, America’s preeminent public media organization. Abbott has transformed the way WGBH creates and distributes educationally rich content to millions of Americans throughout New England and across the nation. Abbott has expanded WGBH’s investment, impact and reach in communities across Massachusetts with multiple public TV and radio services, and a significant expansion of local journalism, including launching a new NPR News station in Boston. His commitment to fostering citizenship and learning led to the launch of PBS LearningMedia, a free, national online service offering classroom-ready digital resources for educators in all 50 states. Abbott joined WGBH as Vice President and General Manager in 1998 and was named President and CEO in 2007. He holds a bachelor’s degree in Political Science from Columbia University and an MBA from Stanford University. He is a member of the boards of National Public Media, PRI/PRX, NEPM, Contributor Development Partnership (CDP), PBS Distribution and Project Healthy Children. He is an elected member of the American Academy of Arts and Sciences, and the recipient of the John Jay Award from Columbia University.

A multimedia, instructional food preparation organization changing how we cook by searching the world for bold, simple recipes and techniques. Adapted and tested for home cooks everywhere, these lessons are the backbone of what they call the new home cooking. The organization comprises a magazine called Christopher Kimball’s Milk Street, a cooking school, Milk Street Radio, a website for video podcasts as well as Milk Street Live! broadcasting live events.

A PBS member station in Boston. It enriches people’s lives through programs and services that educate, inspire, and entertain, fostering citizenship and culture, the joy of learning, and the power of diverse perspectives. It is a trusted news organization that is driven by facts rather than factions. WGBH supports vulnerable learners through K-12 initiatives that inspire curiosity and creative thinking; promotes science literacy so that people can make informed decisions about our changing world; and champions the arts and gives the public access to both the greatest performers and emerging talent; and focuses on innovation to ensure that their services are available and relevant to all.