Thank you Provost Christine Siegle,  President Mark Nemec, and all of you for this opportunity. Most important of all, congratulations to each and every one of you. 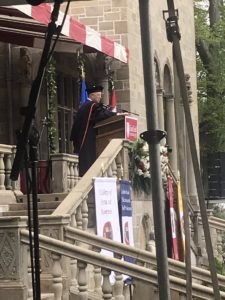 I will keep these remarks brief, for many reasons not least of which is a conversation I had with my son Nate who recently reminded me in no uncertain terms that it is your accomplishments being celebrated here today, not mine.  I will briefly share only three things and then sit down.

First, as much as I appreciated the generous introduction, that is not really who I am, or at least is only a part of who I am.  I am also the son of a loving mother who died from a drug overdose before I completed my education.  I was a principal architect of three losing presidential campaigns, one of which spent more than four years paying off debt.  I’m happily married, but only after a first marriage that failed. And after I graduated from college I went straight to law school and then failed the bar exam. Twice.  As the infomercial says, ‘wait, there’s more!’ But I’ll spare you.

I share this not for sensationalism or sympathy, or to hold your attention but to persuade you that no life, not even a successful life, perhaps especially not a successful life, is lived as an unbroken string of successes.  The shortcomings, failures, and even bad luck that are an inevitable part of being human need not hinder your success if you know what to take from and do with them.   Conversely, spend your life or career carefully avoiding any risk of failing and you will almost certainly guarantee it.

So try to see the world whole and to let the world see who you really are. Not because it will always be as attractive as your Facebook or Instagram feed, but because in the long run people figure it out anyway.  As my wife Rosemary taught me we live longer and healthier if our “on stage” and “back stage” lives are one and the same, an undivided life. It’s the richest blessing I can wish you.

Second, as diverse as you are in you intellect, appetites, energies, appearance and ambition, you share in common at least one gift and one power.  The gift is the ability to share your strength.

The anti-hunger and anti-poverty organization I started in 1984 with a $2000 cash advance on a credit card is called Share Our Strength and was built on the belief that everyone has a strength to share, a gift that you may take for granted but that can be deployed to benefit others. By sharing strength, I don’t mean writing a check or volunteering at a soup kitchen. I’m talking about giving of yourselves, of your unique value added as chefs have done by cooking at food and wine benefits and teaching low income families nutrition education, and as have done teachers, nurses, corporate execs, authors, architects, journalists, and so many others including low income families themselves working in their communities.

Since that $2000 cash advance we’ve raised nearly $1 billion to help end hunger in the U.S.  We’ve added millions of America’s poorest kids to school breakfast programs, and seen attendance and test scores improve accordingly.  We’ve added tens of thousands of summer feeding sites when the schools are closed. We’ve help build the emergency food assistance network of foodbanks, etc.  Solving poverty is complex, but feeding a child is not. Our success underscores what can be achieved when, in the words of the writer Jonathan Kozol, you pick battles that are big enough to matter but small enough to win.

It’s good but not good enough.  We can’t finish what we started without you. There are 40 million Americans on SNAP (food stamps) today and nearly half are children. For the first time a majority of our public school students, 51%, live below the poverty line.  11% of American children live in deep poverty, below 50% of the poverty line.

We can’t have a strong America without strong kids. You and I won’t achieve the full potential we have – to live in peace, to travel the world freely, to benefit from shared prosperity and robust economic growth if we don’t close this gap.  James Baldwin: “These are all our children and we shall either profit by or pay for whatever they become.”

The other thing you have in common, the greatest power on the planet, which each of you has in equal measure, is the power to bear witness.

I went to Ethiopia during a devastating famine more than a decade ago, to New Orleans after Hurricane Katrina, to Haiti after the earthquake.  I had less of a sense that I could effect change than that I would be changed by what I saw and felt, by the emotions – sadness, sympathy, despair, anger, outrage, and ultimately hope  – that are the inevitable response to such a situation.

When something affects us powerfully we often say we have been moved. The literal implication is having started out in one place and ending up in another. In this way being moved means being transformed and personal transformation is what powers social change.

Bearing witness makes us complicit.  What we’ve seen can’t be unseen – and we are left with a profound choice: do something or do nothing.

If there was ever a time to tackle social justice challenges, this is it. Our strong economy, 50 year low in unemployment and record high stock market also creates a new moral opportunity: to finally address the scourge of child poverty that afflicts nearly one in five American children.

Our success in treating the symptoms of poverty has not been matched by success in addressing poverty itself or its causes.  Therein lies the opportunity and moral imperative. We have our first chance in decades to go beyond treating symptoms to actually addressing some of the root causes of why children live in poverty in the first place. If we do not do so now, when will we?

If we can put aside politics and focus on the children that are our common bond and future, we might find that our new moral obligation creates — finally — opportunity for all.

Third, and finally: Don’t wait.  Martin Luther King once said “In this unfolding conundrum of life and history there is such a thing as being too late. Procrastination is the thief of time. The tide in the affairs of men does not remain at flood, it ebbs.”   These are more than eloquent words. I went to Ethiopia during the onset of a terrible famine there in 2000 and met a 13 year old girl at a school we were supporting and where we were helping to build a hospital next door.  Her name was Alima Dari and we stayed in touch, exchanging letters and photos.

One day a colleague of mine went to Ethiopia and I gave him a letter to give to Alima, but didn’t hear from him for ten days.  He wrote and said “I hate to tell you this but Alima died of cerebral malaria. She’s been misdiagnosed with Tuberculosis, the hospital we were building next door to her school was not yet finished, and by the time they got her to Addis Ababa it was too late.”  Dr. King’s very words.

You don’t have to go to Ethiopia to find your Alima. She is here in Connecticut, or Texas, or New York or California.   Share your strength on behalf of an Alima somewhere in this world. The time we’re allotted to solve problems is limited and precious.  Don’t wait!

Don’t wait until the mortgage is paid, or until you get the promotion, or until it stops raining.  Most important of all, when your intentions meet the inevitable obstacles don’t just wait.  Jaywalk if you can, break a window if you must, pick a lock.

Social change is not about having a good plan.  It’s not about being well funded. Though that helps.  Success at social change is about knocking down the obstacles between you and your plan, Often the key is in picking the lock.

We need to share our strengths because who among us would truly make it on their own?  Where would we be without our classmates, our teammates, our professors, our parents, our-coworkers, our lovers, and our friends?   Where would we be without extending our hand or reaching for one?  If anyone has ever helped you in any way, you are now in a position to honor it as you leave here by committing to bear witness and sharing your strength.

I know I wouldn’t have lasted a minute on my own.  But I wasn’t on my own and you’re not either given your years here and the community here that’s been built and surrounds you.  Congratulations to the Fairfield University class of 2019.