The Ride of a Lifetime: Chefs Cycle 2017 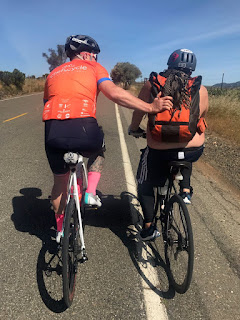 Chefs Cycle 2017 was bigger in every way than before: more riders (230), more money (close to $2 million), more hills (13,000 feet of climbing), more personal fulfillment, more high performance from our colleagues at Share Our Strength.

When we arrived in Santa Rosa, the Flamingo Hotel had been transformed into Chefs Cycle headquarters with riders as anxious about meeting up with their shipped bikes as you might be waiting to meet your date on Match.com.  300 miles lay ahead and hills so long and steep that many accomplished local cyclists never ride them.

We rode out the first morning with flashing red and blue lights of local motorcycle police and California High Patrol leapfrogging each other to control intersections and ensure a safe rollout. Riders quickly self-sorted by skill and speed into groups that would last the next three days: Experienced riders in sleek peloton lines of 8-10 or more. The rest of us struggled and straggled in squads of two, three, or four, often riding alone and silently for long stretches. Strong riders finished by noon and were showered, changed and finished with lunch as others rolled in between 1:00 and 3:00 or later. Duff Goldman was on his bike for 11 hours one day. Boston chef Andy Husband’s for nearly 10 hours the next.  At the finish Andy’s wife asked if she could take his bike for him and he said “yeah, throw it in the pool.”On Day Three the last hill was just four miles from the end of the ride but the hardest climb of all.  Tom Nelson got to the top ahead of me. When I arrived he was off his bike and sitting on the curb, staring straight ahead.  I laid my bike down and sat next to him.  Several minutes went by in silence. We glanced at each other and shook our heads as if to say please don’t say a word or expect any. We got up and rode on. 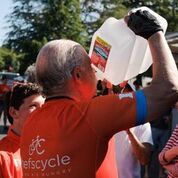 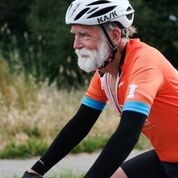 Each night chef Travis Flood, after riding 100 miles, cooked dinner for everyone. Driving up I-5 the night before the ride, a gust of wind tipped over the trailer carrying his equipment.  He lost everything.   Jason Roberts, Mary Sue Milliken, and others said “ let’s share our strength” and called vendors, suppliers and others to replace what Travis lost. Standing next to his makeshift cinderblock grill in the hotel parking lot, Travis told me “I came from a divorced family and so memories of Christmas, Thanksgiving and other traditions just represent stress to me. I still don’t look forward to them. What I look forward to all year are these three days – being with this family.” 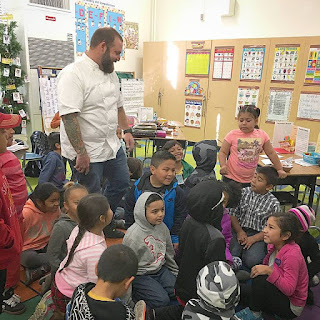 Alecia Moore Hart, who we know as the singer P!NK, rode the third day along with her husband Carey Hart. She told me during a podcast session that she was struck by something else Travis had told her: “Riding is painful, but we get to get off the bike. Hungry kids don’t get to quit being hungry.”
Of many lessons learned, my top three take-aways:

1.      In a nation so politically divided, the desire for community, to share one’s strengths in ways that make you part of something larger than yourself, is greater than ever. Chefs Cycle not only raises money and feeds kids, it builds that community.  Many riders, no matter how successful in their careers, miss that and spoke about it.
2.      Small advances, relentlessly pursued, yield big results.  Last year a rider taught me to conquer steep climbs by thinking, “if I can just pedal to the next tree, then pedal to the next telephone pole, then the next crack in the side walk … eventually …”  The same is true for our No Kid Hungry campaign. If we can get breakfast participation to 60%, and then 64%, and then … we eventually reach goal.  A corollary: little gestures can have large impact. Many riders told of struggling up a hill, about to quit, and then feeling a hand on the small of their back, from another stronger rider who pulled alongside, more encouragement than push, but enough to do the trick.
3.      Mental toughness and determination prevail over the most formidable obstacles. Riders whose bikes, training and physical condition should have left them with little chance of getting up hills passed riders in better shape who got off their bikes and walked.

For 48 hours after the ride, everyone was still comparing notes about hills, triumphs or meltdown stories, making suggestions about what could be done differently next year.  As we were getting ready to leave the hotel the next day, Travis Flood was returning from Home Depot in his pickup truck with asphalt and a blow torch. Nate and I went over to see what was up and help. The cinderblock grill used to prepare dinners for so many of us, had sunk into the asphalt and left a pothole in the parking lot. Though Travis had done so much already, he felt accountable for fixing that too. A sense of community will do that to you. 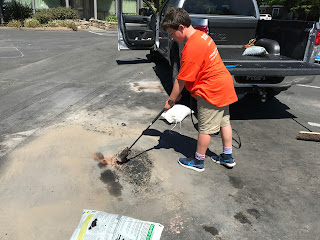 It’s never too late to support Chefs Cycle or one of the riders. See @ http://chefscycle.org/  Thanks!
Chefs Cycle